The nearest station is located at Faro city centre. Transport options on how to get to Faro train station from the airport. Information on train types, timetable and prices. Algarve popular destinations and closest train stations.

Pre-book a private transport between the airport and your hotel. Transfers for small or large groups of passengers. Meet & greet service.

redirects to external affiliate partner service we are not responsible for the service, read terms on the respective website

Find the best hotel deals for the season around the Faro area and throughout the Algarve. Compare prices and book securely online.

Currently there is no railway connection to Faro airport. The nearest train station is located 6 km away, in Faro city centre. The Portuguese government has announced that by the end of 2022, Faro airport will be served by a direct connection by train. In the Algarve and the rest of Portugal, the train transport and associated logistics is managed by the state company CP - Trains of Portugal. The railway maintenance and infrastructure is managed separately by another public company, REFER - National Railway Network. Currently, the country is served by 20 railways, one of them is the Algarve rail line, the country most southern railway and the closest to Faro airport.

The taxi ride between Faro airport and the train station lasts about 10 minutes under normal traffic conditions and costs around 11€ to 16€, depending on the number of passengers and time of day the transport takes place. For more information refer to the page about taxis at Faro airport.

Faro central bus station in the city is located 200 meters from the train station. Either from or to the airport, take the circuit 16 bus - the bus route also has a stop next to the train station. Trip takes about 20 minutes and the ticket price is 2.25€ per person. For more information see the page about buses at Faro airport.

A private transfer between Faro airport and Faro train station in the city centre takes approximately 10 minutes and the average price for a transfer up to 4 passengers is 20€, no matter the time of day. The transport is private, not shared and requires prior booking via the Internet. It is the most convenient transport option as it avoids waiting time upon your arrival at the airport. Several types of vehicles are available in accordance with the number of passengers to be transported. For large groups it definitely represents the option with the best value for money. For more information about this private shuttle service see the section on transfers at Faro airport - service available everyday for 24 hours.

The length of the Algarve rail line is approximately 140 km. It crosses the entire region from east to west, from Vila Real de Santo António to Lagos with 30 train stations in total. The only link to other train lines occurs at the Tunes station, near Albufeira, establishing the connection with the south line towards Lisbon. Currently there is no direct train connection between the Algarve and Spain. International trains are only available from Lisbon and Porto with the connections Lisbon-Madrid-Hendaye and Porto-Vigo respectively.

There are three types of trains circulating on the Algarve rail line. One which crosses the region from west to east - the regional or local train - and the other two which establish the connection with the south line towards Lisbon and Porto - the inter-cities train and the high speed train also known as alpha pendular. 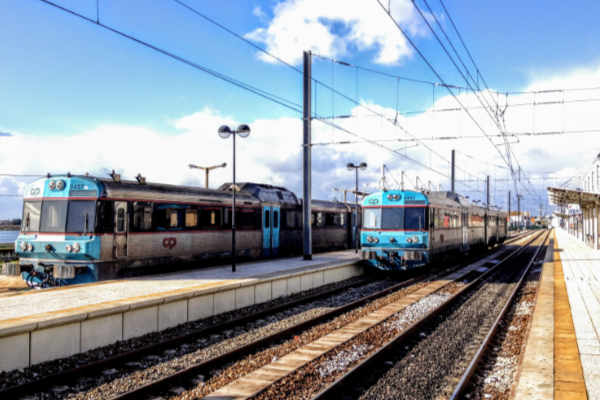 Identified by the letter R, these are the local trains in the Algarve. They travel the region rail line west to east, from Lagos to Vila Real de Santo António, stopping at all in between stations.

This city hopper train, designated as IC, establishes the connection Faro-Tunes-Lisbon and vice versa. The route has 13 stops in total - 3 in the Algarve rail line between Faro and Tunes and 10 in the south line between Tunes and Lisbon. 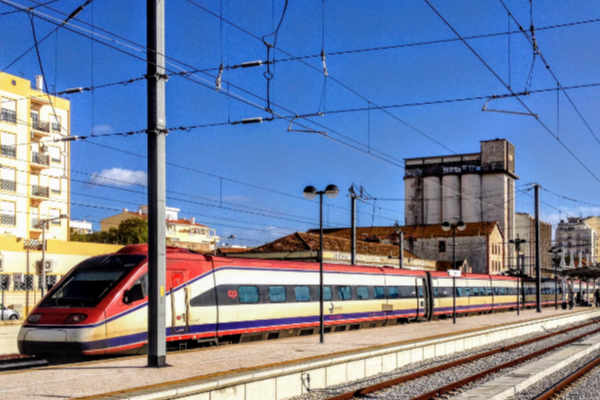 Designated as AP this train crosses the country from south to north establishing the connection Faro-Lisbon-Porto without the need of switching trains. The train route from Faro to Lisbon is identical to the inter-cities train but only with 6 stops in total - 3 in the Algarve rail line between Faro and Tunes and 3 between Tunes and Lisbon.

The construction of the Algarve railway started during the late nineteenth century and lasted up to the mid-twentieth century. The original layout, which still remains, was mainly designed for trading goods between major economic centres back then. At the time, Algarve was a big exporter of salt, fresh and canned fish, vegetables and dried fruits. Tourism wasn't yet the region main economic motor and the initial railway trajectory didn't foresee some of today's major touristic areas. As a result, some popular holiday destinations like Vilamoura, Quarteira, Olhos de Água, Albufeira, Armação de Pera, Carvoeiro, Alvor, Praia da Luz and Sagres, are all further away from train stations - over 5 km. To help you decide on which station you should get off when travelling by train to your final destination, the following table shows the nearest train stations and the respective price for the regional train trip from Faro.

Train from Faro to Albufeira

If you're planning to travel by train from Faro airport to Albufeira it will require several travel stages since there is no direct connection.

Step two: take the regional train to Lagos and exit on the Albufeira-Ferreiras station, located 8 km from the Albufeira city centre - the price is 3,30€ per person.

Step three: once at the Albufeira-Ferreiras train station, take the bus from the urban orange line - 1,40€ - it will take you to the Albufeira bus terminal, located on Alto dos Caliços.

Step four (if applicable): depending on the location of your accommodation, you may have to take a second bus. Albufeira urban bus circuits are provided by the company Giro - see bus lines map in Albufeira - the ticket price is 1,40€ for all lines.

Train from Faro to Lagos

Since there is no direct train connection between the airport and Lagos, you must first get to the train station in the city of Faro, 6 km from the airport.

First step: at Faro airport take circuit 16 bus bound for the central bus station (terminal) in Faro city - ticket price is 2.25€ per person. The route penultimate bus stop is precisely the Faro train station. If you fail this stop, the walking path from the terminal bus station to the train station is short - about 200 meters / 5 minutes.

Second step: take the regional train (R) towards the Lagos station, about 90 km. The ticket price is 7,30€ per person and train trip takes about 1h45min.

Third step: after arriving to Lagos train station, several bus circuits are available for the transport to your final destination. There are 9 bus lines covering the entire area of Lagos, including Praia da Luz and Burgau. The ticket price is 1,20€ for destinations within the city and 1,60€ for locations outside the city - both tickets are valid for 1 hour and include any change of lines - see Lagos buses timetable and stops.

Having arrived at Faro airport and taking into consideration the necessary steps to travel by train to Albufeira or Lagos, as shown in the previous examples, one might realize that the time it takes and the total cost of all the necessary intermediate trips multiplied by the number of people in the travel group, may not be a good value for money option as opposed to a private and direct transfer from Faro airport - especially for farthermost destinations and larger groups of passengers. Another quick option for transport to Albufeira or Lagos is to take a public taxi upon your arrival at Faro airport - usually more expensive than a private transfer but without the need of online pre-booking.

Trains from Faro to Lisbon

To travel by train between the cities of Faro and Lisbon you will have to catch the inter-cities train or the alfa pendular high speed train from the Faro train station at the city centre, 6 km away from the airport. Note that apart from Faro, there are 3 more stations in the Algarve where you can take one of these trains to Lisbon - Loulé, Albufeira-Ferreiras and Tunes stations. The ticket price is between 20€ to 25€ depending on the chosen train and departing station.

Trains from Faro to Spain

There are no direct trains connecting Faro to southern Spain. You must first take the regional train to Vila Real de Santo António in the Algarve, located near the border with the Spanish town of Ayamonte. Once there you need to take a taxi or public bus to cross the border and get to the Huelva train station, 60 km to the east of Ayamonte. From Huelva you can then get to Seville by train where you will have connections to Malaga and the rest of Spain, including the high speed train AVE to Madrid.

Alternative: the best option to get straight from Faro airport to your destination in southern Spain is to pre-book a private transfer from the airport to one of the available destinations in Andalusia. It is the fastest, convenient and affordable transport option, especially for passengers travelling in group. Another option, cheaper but more time consuming, is to take one of the seven daily buses bound for Seville from the central bus station in Faro city.

If you need to stay overnight in Faro city before catching the train, there are several lodging possibilities close to the station. From hotels, hostels, guest-houses to local inns, it's no more than a 10 minute walking distance to get from one of these accommodations to Faro train station. For more information on the places to stay for spending the night in the Faro area, see the page about hotels in Faro.